my name is Simona and I run Lingotot Exeter.

I was born and raised in a small Italian city but my dream was always to live amongst people from all over the world, surrounded by as many different cultures as possible. After I finished college, where I studied English, Spanish and French, I moved to London. This was 18 years ago.

I have always worked in hospitality and customer service, I love working with the general public but I always felt that something was missing as I really felt the desire to share my passion for languages with others. It is after my daughter started primary school, last year, that I started considering to focus on a career that would fit around her and that, most importantly, would allow me to follow my dream.

One day I noticed a Facebook ad about Lingotot and I have realized that my wish was not impossible to achieve.

I loved the idea of teaching languages to children in a fun and interactive way, through songs, stories, games and crafts. It makes learning the language as natural as possible for the children.

My main inspiration is Bea, she speaks English, Italian and Portuguese and since I started my training she seems to be very keen on Spanish too. She is my living proof that children are like sponges and that as much as it is true that the sooner they start to learn a second language, the better, it is also true that it is never too late to learn.

COMMUNITY CLASSES (children and parents/carers learn alongside each other whilst having lots of fun together;

PPA IN SCHOOL and BREAKFAST, LUNCH, AFTER SCHOOL CLUBS (KS1 and KS2)

We are the only provider to offer LANGUAGE QUALIFICATIONS for our KS2 children, accredited by NCFE CACHE, an OfQual awarding body. 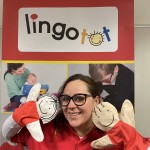