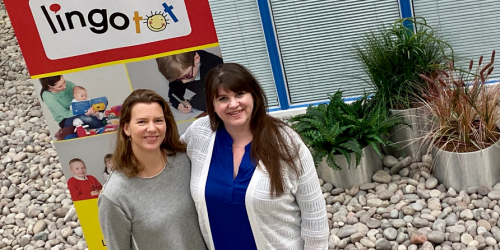 Growing up in a trilingual household, Sofia was keen to open up the world of modern languages to young children and launched her own children’s language business in a bid to engage youngsters in the joy of learning a foreign language at a much earlier age.

After bringing Lingotot to Ireland, a UK-based children’s language franchise in 2018, Sofia was delighted by the popularity of the fun and interactive classes and has embarked on an ambitious nationwide expansion plan as Lingotot’s national master franchisee for Ireland, with the rights to develop and sub franchise across the country.

The multi award winning business which offers pre and primary school aged language classes in multiple languages will be branching out in the New Year.

Sofia said: “Languages have always been a huge part of my life.  Now with 3 young children of my own, I love making language learning fun for the children I teach and am thrilled to be offering this with the support and credibility of an award-winning methodology and NCFE and CACHE accredited courses.”

After seeing the success of her own classes in her area of Dublin, Sofia knew that taking on the master franchise and expanding was the right decision for her.

She continued: “The business has been a resounding success locally with positive comments from both parents and schools. I have also benefitted from a wonderful work-life balance since joining Lingotot and I am passionate about helping other families experience the same through franchising.”

Founded by Angela Sterling back in 2010, Lingotot now teaches more than 20,000 children each week, offering a variety of language classes including French, German, Spanish and Mandarin.

Angela said: “We have over 50 franchisees in the UK who all enjoy flexible, professional yet fun careers teaching languages to young children and I am proud and delighted to be bringing Lingotot to Ireland.”

She continued: “After working with Sofia for 18 months, I have seen her business thrive and I know she is exactly the right person to lead this project. Ireland is an incredibly exciting market for us and I can’t wait to see her success!”