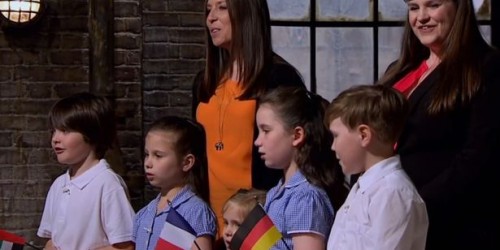 Dragons' Den One Year On

Angela Sterling, Lingotot founder, appeared in the formidable Dragons' Den a year ago pitching for £50,000 investment for 10% of her childrens’ language franchise business, Lingotot. Angela entered the Den supported by Franchisee Amy Gumbrell of Lingotot Kirklees and a team of Lingotot students who sang to the Dragons in four different languages.

Lingotot teaches more than 12,000 children each week through a rapidly growing network of over 100 franchisees and tutors in the UK. Lingotot is the only provider to offer fully accredited language courses in primary schools and teaches French, Spanish, Mandarin, German and Arabic to children aged 0-11.

In the episode last year, the dragons did not share Angela’s optimism for international expansion and instead encouraged her to continue to grow the successful UK franchise model.

In the last year Angela has indeed taken Lingotot to Dubai, launching a dedicated middle-east operation working with some of the country’s top international school chains.

The new UAE business has even been named a finalist in the prestigious Dubai-based GESS awards (Global Educational Supplies & Solutions).

Angela said: “The Dragons' Den is an experience I will never forget; it was terrifying and emotional yet hugely worthwhile.

The business continues to go from strength to strength here in the UK too with franchisee numbers growing by 35% in the last year and Lingotot being named Family Friendly Franchise in the Working Mums awards.