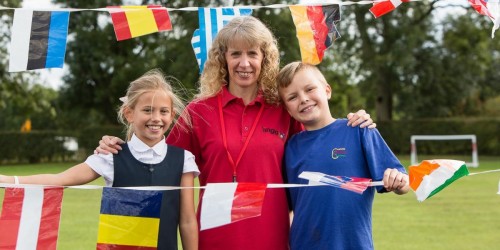 Lingotot school pupils in Co Durham celebrated the European Day of Languages by practicing their linguistic skills through a range of activities designed to show Europe’s cultural diversity. Children in Coxhoe Primary School enjoyed a fun all-day language sessions to pupils in Year 3-6.

Year groups 2-6 took part in a ‘Race around Europe’ competition on the schools running track, and every class in the school was responsible for creating an information board about a European country, with the chance of winning an exciting prize.

Cllr Olwyn Gunn, Durham County Council’s Cabinet member for children and young people’s services, said: “The European Day of Languages is a great opportunity for celebrating the number of different languages that exist across the continent.”

“Research has shown that children who know two languages can gain an academic and social advantage. Children have an amazing ability to learn language but it’s important to know it’s never too late to start learning.”

Lingotot teacher, Kara, said: "It was brilliant to be invited along to Coxhoe Primary School to share in their European Day of Languages celebrations. We had great fun learning songs in French, acting out role play situations and discussing the use of languages in the workplace. All the children were amazing and super enthusiastic. We had a fantastic day!"

Adele Bainbridge of Lingotot Tyne and Wear who organised the event added: "We were delighted to be a part of Coxhoe's European Day of Languages celebrations and I am very proud of the positive learning environment Kara created on the day. Here at Lingotot we are passionate about making languages fun and accessible for all. Sharing our love of languages makes us so happy and seeing the children respond well to that is why we do what we do!"