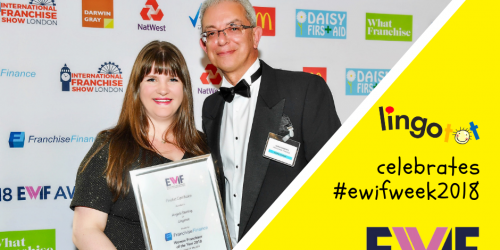 This week is #EWIF Week which celebrates a massive TEN years of the organisation. EWIF was created to encourage and support women in the franchise industry, as franchisors, franchisees or suppliers who support them.

Here at Lingotot our EWIF journey began when I attended my first meeting in Manchester a few years ago. I loved meeting other franchisors at the event, until that point I'd never met another franchisor! But with two babies at home and a husband who worked away from home, travelling down to Manchester form Co Durham just wasn't going to work. So I began to pester Clive, EWIF Chair, about opening a branch in the Nort East. It took some time, but it finally worked! Last year I hosted the first #EWIFNE meeting as regional chair in Newcastle.

As franchisor for Lingotot I am passionate about providing support and mentoring to women in business and I'm lucky to have won many awards for our own support network within Lingotot. Franchising can be such a good option for women and I am delighted to be part of EWIF, spreading the word about franchising and seeing women succeed at achieving their goals and dreams, everything EWIF stands for.

They have certainly helped me and I was a finalist for Woman Franchisor of the Year 2018!

Our meetings are well attended by franchisors, franchisees, suppliers and at least 3 women have franchised their businesses as a direct result of attending our new meetings in the North East - I couldn't be more proud!

This week to celebrate #ewifweek2018 I will be sharing some videos on social media from Lingotot franchisees and some of our fabulous North East EWIFers! I hope you find their stories interesting and that they may inspire you to start or take the next step in your own business journey.