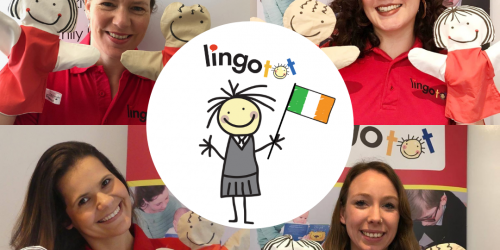 Lingotot continues to expand across Ireland from Dublin to Limerick and Galway. Get to know more about the Lingotot Ireland network here.

Lingotot was brought over to Ireland from the UK by Dublin-based entrepreneur Sofia Colás in 2018. Sofia founded Lingotot South Dublin, and also became the master franchise partner and Director of Lingotot Ireland. After the continued interest and popularity of Sofia’s classes in the Dublin area, she made the strategic decision to expand nationwide. Lingotot Ireland have now welcomed four new franchisees across Dublin, Limerick, and Galway, each joining the network amidst a national lockdown.

First to join the Lingotot Ireland network was Desirée Modesto, founder of Lingotot West Limerick. Desirée joined Lingotot last year during lockdown and has since proved that even in the face of adversity, businesses can bloom. Her online Spanish and Portuguese classes have been a success and Desirée has even expanded her team to welcome Paloma Valencia Castro as a Spanish tutor.

Melissa grew up in a multi-cultural environment and was immersed in languages from a very young age. She therefore recognises the importance for children to begin learning a language as soon as possible. Melissa’s interactive online French and Spanish classes have proved popular since her launch and the future of Lingotot Pembroke looks very bright.

Sophie discovered her passion for languages whilst at school from her French teacher, and went on to study Applied Languages at university. With a little boy of two, Sophie was looking for a flexible career where she could apply her language skills. Lingotot was the perfect solution, and Sophie has been teaching French and Spanish classes online since.

Due to the ongoing pandemic, Lingotot Ireland’s newest members Wayne and Vicky Griffin, founders of Lingotot East Galway, are poised to return to Ireland from China. They aim to return to primary schools, preschools and the community at the start of the September term this year, however they will be offering free online taster sessions for their Mandarin classes before then.

Sofia says, “I couldn’t be happier with team Ireland so far. These young entrepreneurs have been able to see beyond the challenges of a pandemic and set themselves on a clear path to growth in the years to come. We all come from a variety of backgrounds, bringing different skills to our growing network, but share a common goal to encourage young children in Ireland to give languages a go before secondary school.”

The establishment of each Lingotot Ireland branch provides a positive narrative for small businesses during the pandemic. The Lingotot online learning platform has meant that each business was able to launch successfully and begin teaching straight away. With hopes for a return to normality increasing, outdoor fun and active summer camps as well as forest schools are planned and will be opening up for bookings soon as we look forward to seeing our students face to face again.

Angela Sterling, who first founded Lingotot back in 2010, says, ‘after watching Sofia’s business thrive in Dublin, and then expand across Ireland was a very proud moment. Sofia is a brilliant business woman, and we are over the moon to have Desirée, Melissa, Sophie, Wayne and Vicky as members of the Lingotot network. I am overjoyed to have these fantastic people continuing the Lingotot mission of providing widespread access to language learning for children and I can’t wait to see each of their businesses grow.’

Find out more about Lingotot Ireland here or contact them at ireland@lingotot.com.