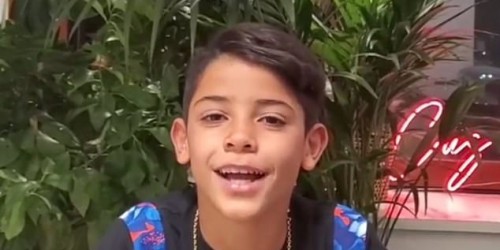 Lingotot applauds Cristiano Ronaldo's eldest son on being fluent in FOUR languages! The multilingual 9-year-old joined Instagram and introduced himself in an impressive four languages, proving he's already a skilled linguist by presenting himself to the world in English, Spanish, Portuguese and Italian.

On his first post to Instagram he smiled at the camera, gave the thumbs up and said in English: 'Hi guys. This is my new Instagram account. I hope you enjoy. Take care" He then switched seamlessly to the other three languages: Spanish, Portuguese and Italian.

Ronaldo's son also shared two photos alongside his introduction video - one of him posing at Milan Fashion Week and one of him in the bath with his family.

After sharing his first video, Cristiano was keen to show his support for his son online as he responded to the introduction with a kiss emoji. His dad's friend and fellow professional footballer, Miguel Paixão, added to the sentiment as he wrote 'welcome Chris.'

Cristiano Jr's language skills certainly are impressive and reflects a growing trend amongst the stars for their children to learn additional languages. The Duke and Duchess of Cambridge have ensured their children are learning Spanish and Lingotot helped Sam Faier’s son Paul after appearing together on ITV Be series the Mummy Diaries.

Up and down the country and even overseas, Lingotot teaches over 20,000 children aged 0-12 each week to speak a range of modern foreign languages including French, Spanish, German, Arabic and Mandarin. You can join in too at www.lingotot.com