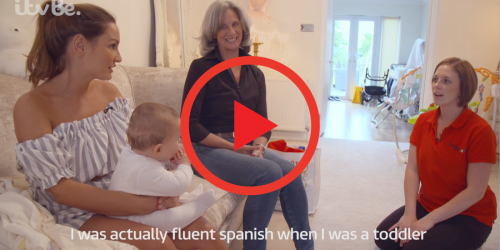 We were delighted when #ITVBe called us asking if we could help #SamanthaFaiers introduce her son to Spanish!

Sam was bilingual in English and Spanish as a child, but has lost some of her fluency over the years. She understands just how important it is to know a second language and how easily little children pick up new languages like sponges.

#Lingotot has been teaching language classes to children aged 0-11 since 2010. The sessions have captured everyone's imagination since the very start with #GabbyLogan's #bbc5live show attending our very first class!

Since then Lingotot has grown into a multi award-winning education company delivering foreign language lessons to over 12,000 children every week. Sam knew she could trust us to really engage Paul and give some language-learning strategies to use at home, involving the whole family.

So Michelle Marsland of #LingototNE delivered a special 1:1 session in Sam’s Essex home. She sang some our favourite songs with Sam and baby Paul, played some simple games in Spanish and shared some top tips for speaking Spanish at home.

“Baby Paul was simply adorable. He is a real smiler and thoroughly enjoyed the session! Sam’s mother-in-law Gaynor was really enthusiastic too,” says Michelle, whose baby son James is exactly the same age as Paul. “Sam looked stunning and was really lovely. We had a cuppa and a chat after the session and we still text each other regularly. Looking forward to seeing Sam again for our next session!”

Michelle uses Spanish at home with her two children and her youngest, James, is the same age as Paul.

But why learn a second language in childhood? Research suggests that children who know two languages can gain an academic and social advantage over those who speak only one. Children have an amazing ability to learn language and this happens best when it is interactive, engaging and child-centered - just like every one of our Lingotot classes.

Since Sam introduced Paul to Spanish many other high profile parents have joined in including Cheryl & Liam and William & Kate!

The show was broadcast on #ITVBe last October, but you can watch it again here.